All Courses Blog Team About Us For Business Login
Uncategorized

Blockchain Coding for Beginners - For Amateurs by Experts 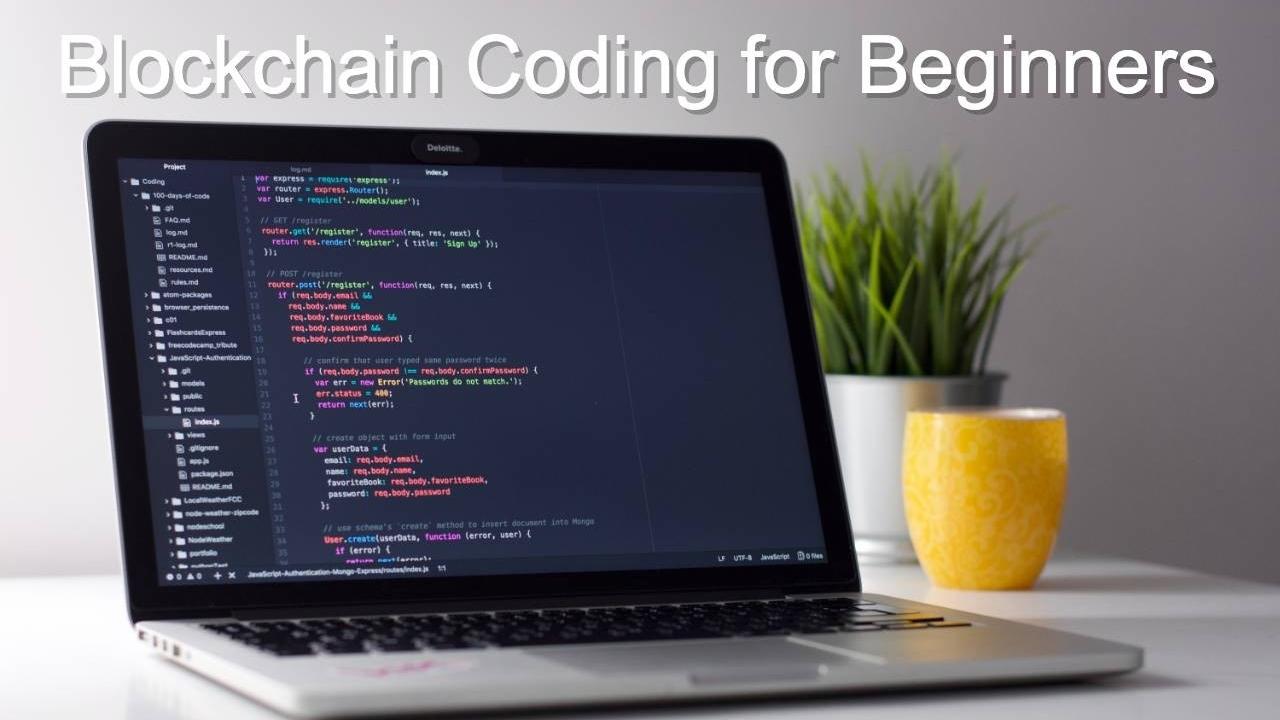 Since cryptocurrencies came alive, blockchain has gained intense momentum. It simply confirms the fact that money has a way of capturing human attention. However, blockchain is far beyond digital currency. Under this disruptive technology lies the potential to change how the world thinks about giving instructions to computers. In fact, blockchain applications are already making huge impacts both in the private and public sectors. The technology will also continue to play a huge role as the world enters the fourth industrial revolution. Is blockchain coding for beginners? The answer is YES!

As a programmer or potential programmer who wants to begin blockchain coding, what’s in it for you?  Where and how do you start? This is the focus of this article. First, the article talks about the steps you can take to become a blockchain developer by showing you the best courses you can take and the most popular programming languages to use. Second, you will learn the important factors to consider to have a smooth ride in blockchain coding. Finally, you will learn the process involved in creating your first blockchain. You have gotten a lot to learn here, therefore, take a sip of water or coffee as we move forward.

If you are a beginner in blockchain coding, it’s good for you to know at this juncture that you can be an expert. All you need to do is to learn the right courses and practice what you learn. At Ivan On Tech Academy, we have quality courses designed for beginners, intermediate and expert developers. Some of the courses a beginner can take to learn blockchain coding include the following.

With Blockchain 101, you will get yourself acquainted with how blockchain works. You will learn how popular blockchain applications like Ethereum, bitcoin, and smart contracts are built. In addition, this course will teach how consensus algorithm, mining and several other components that make up the blockchain work. It is the perfect course for beginners to begin their journey in blockchain coding.

The reality is that becoming a blockchain developer is easy if you are willing and ready to learn. The New Blockchain Developer course is one of the best courses when it comes to blockchain education. Here, you will learn to write code in C++ and Javascript as a beginner. The course offers an immersive learning experience; in fact, before you finish taking the course, you will have created and deployed your own smart contract.

You are definitely not willing to learn blockchain coding just for the fun of it. There is money in blockchain and you can make some for yourself by taking part in the Blockchain for Business course. The course will equip you to develop various decentralized applications for businesses, financial institutions, and companies. In particular, you will learn to create a hyperledger infrastructure and how to integrate hyperledger, etc. The course will go the extra mile to teach you how to test your blockchain application for quality assurance.

Bitcoin does not need any special introduction because the greatness it has built for itself over the years speaks volumes. This is the most popular blockchain in the universe. In our Bitcoin Programming course, you will learn how to program on bitcoin and write your own bitcoin scripts. In addition, you will be able to create applications on the lighting network. The course includes getting to know the bitcoin development tools, bitcoin attack surfaces, lighting network, lighting apps, and lighting security.

The gaming industry is huge. Therefore, as you learn blockchain coding, it is a great idea to learn to develop games using blockchain. The Blockchain Game Developer course has different three tracks namely Ethereum game programming, unity game programming, and Enjin blockchain game programming. At the end of this course, you will be able to use some of the most popular frameworks to build games and incorporate blockchain and cryptocurrency.

Blockchain coding surely involves a few challenges. However, if you consider the factors to be discussed in this section, you will have a smooth ride.

In blockchain coding, all operations must be deterministic. For instance, if X + Y = Z, then, irrespective of any situation, X + Y will always be equal to Z. This is what we mean by deterministic behavior. The concept behind this is simple, you cannot have a transaction that exhibits one behavior today and another behavior tomorrow. For example, a smart contract cannot work in two different ways when operated in different systems. Isolation is what makes blockchain operation deterministic. That is, you isolate the transactions and smart contracts from all elements that are non-deterministic.

In this section, you will learn the process involved in creating a simple blockchain. In every block in a blockchain, some specific information is very important. They include the following:

Also, in creating your first block, it is imperative to understand the following terms.

Why is the hash important? Simply put, the blockchain has a heavy reliance on hashing. The concept behind this is that a blockchain has an ordered chain of blocks with each block having the following information:

The block where the hash of the previous block is zero is the genesis block. To really understand why a hash is special, let’s look at one example. Suppose the transaction in a block says “A pays 100 dollars to B”, if someone tries to mutilate the blockchain by changing the transaction in the block to say “B pays 100 dollars to A”, this will alter the hash value. Consequently, there will be a discrepancy in the hash value of that block and its parent block (normally, the hash of a block should match that of its parent block). For this inconsistency alone, the hashes of all blocks in the chain become invalid. Therefore, the entire chain collapses.

You can simply say that the hash provides a great level of data security to blockchain.

Here, you are to prove that you carried out an intensive computation before given the right to add a new block to the chain. The computation in question is a mathematical problem. See how it looks like:

Find the number N which when hashed with the block data D gives E number of leading 0’s.

Here, D is the block data, excluding N while E is the difficulty setting for the mathematical problem. The bigger the value of E, the more time it takes to find the value of N.

In order to validate your blockchain, you simply need to do the following things:

After following all necessary procedures to create a blockchain, the next thing to do is to test the blockchain to be sure everything is intact. Generally, you want to confirm the following:

The Best Programming Languages to Use for Beginners

Nothing can be done without the right tool. No matter how good a developer maybe, if there is no good programming language, the developer becomes a little incapacitated. The good news is that there are seamless programming languages for you as you begin your journey in blockchain coding. Additional good news is that our courses also teach you how you use some of these languages for blockchain development.

C++ is an object-oriented programming language that is efficient, secure and flexible. It can be called the core of blockchain coding because several blockchains like bitcoin have been built using C++.  The language also has some principles in common with blockchain. These include data hiding, abstraction, polymorphism and encapsulation to prevent any unintended alteration of data. With its multi-threading capabilities and primitive control over memory, C++ is a goal.

All hail JavaScript, the indisputable king of the web which can be regarded as the most used language in the World Wide Web. As you know, most of the browsers we use today, including Google Chrome and Firefox support JavaScript. When it comes to making a tamperproof blockchain, JavaScript does that in such a way that it makes it impossible for fraudsters or hackers to alter. You can learn to use this language by starting with our JavaScript for the Blockchain course today.

Solidity is a very friendly language for beginners. It was created by Ethereum, the second-largest cryptocurrency in the globe. This simply means that the language was created with blockchain in mind. When it comes to the speed and ease of creating smart contracts, we give it to Solidity. Also, it’s the language to use if you want to create a secure, multipurpose and immutable blockchain or hold an initial coin offering or build a decentralized app. With our new blockchain developer course, you will be on track to becoming an expert in Solidity.

Java is a general-purpose language that is class-based, concurrent and object-oriented. Since the programming language was created in 1995, it has consistently been among the top three programming languages in the world. Blockchain developers like to use Java because of its high portability. Java programs don’t rely on a system-specific architecture, instead, they use the Java Virtual Machine (JVM). As a result, the programs written in Java language are portable across almost all computational devices. It’s the reason why it has a place of pride in blockchain coding. Some blockchain projects that use Java include NEM, IBM blockchain, Neo’s contract and Ethereum.

This is a new programming language that is created specifically for blockchain. It can be used to develop sophisticated smart contracts better than solidity and it has a functionality that is superior to Bitcoin scripting. Smart contracts built in solidity, even in error, can never be changed because they are immutable. However, simplicity has the capability to change smart contracts once such action has been established by a consensus.  Just like C++, simplicity also has object-oriented features and it uses principles similar to blockchain to prevent alteration to data.

With only a few blockchains that are up are and running, technology has played a huge role in the world particularly in asset and data transfer, digital currency and contracts. Every day, there is a growing need for more blockchain applications. Consequently, the need for competent blockchain developers arise. Many developers have seized this opportunity for themselves. You too can join them. The benefits are enormous; you will join the latest trend, do something new, make money and create a positive impact on humanity and for the development of the world. Take a step right now by getting started here.

As of today, Ivan On Tech Academy has 15,000+ students learning blockchain coding. Time and again, our courses have proven to be some of the best resources for blockchain education in the world. Join us by taking action now.